January: Drowned in paragraphs and paperwork. Enjoyed the sun during the second Hoodie Offsite on Lanzarote.

February: Spent a weekend in Lapland.

Co-founded a company and became one of its two CEOs.

March: Got my wisdom teeth extracted and lost the key to my flat (both on the same day. Can’t recommend). Had lots of trouble to cope with everything that was and is going on in tech this year (and still have). Participated in one HTML & CSS-Workshop and built a … 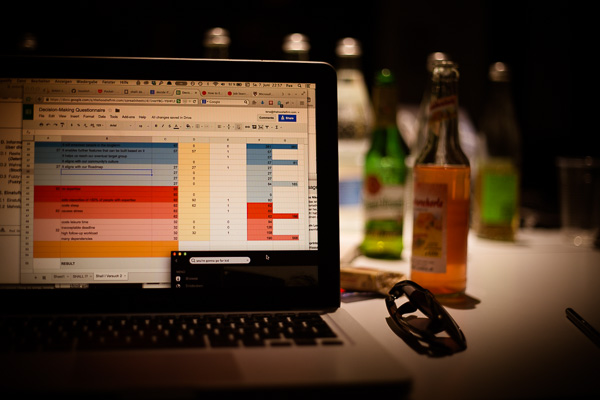 Spent half a week in Istanbul.

October: Started to help fight Ebola together with eHealth Africa.

November: Relaunched the Hood.ie Website together with its community. I spoke at six conferences (Codefront, IndieTech Summit, FrOSCon with Ola, JSConf EU, JSIst, ArrrrCamp), at two meetups (up.front, TechFusion Szczecin) and gave one workshop (Hoodie Workshop with Jan-Erik at BarCamp Salzburg). At Codefront, I gave my very first talk at a tech conference, and at the time, I had decided to just see how public speaking goes for me (especially given the tech environment). I’m still not sure if I want to continue this.

I made 434 contributions on GitHub.

I took more than 7500 photos this year, which makes for around 140 GB of data. Amongst them, I had the great pleasure to take portrait photos of 15 people, take photos for CSSConf EU, and took a few pictures while travelling – Lapland, Lanzarote, Gran Canaria, Istanbul.

All in all, it was an incredibly busy year, and one of the most exciting and exhausting ones I’ve ever had. One year ago, in December 2013, I couldn’t have even dreamed of any of the things that happened this year. I worked way too much and will have to see how to manage all my projects and work better next year. There’s still so much to do and so much to learn for me, as well as many things that I don’t know how to deal with yet, including all the doubts about myself and my work. I’ll see how things work out next year.

Still, I’m incredibly grateful for how much I learned, for the wonderful people I got to know and for those I got to work with throughout this year. My special thanks goes to Til, Kevin, Jan and Ola, as well as the wonderful people at Kleinerdrei, the Hoodie Community and everyone else who gave me feedback to my work and supported me.

Hair: shorter or longer?
Way shorter. Here’s that process depicted in two pictures for my Mum: Best food?
The fish sandwich at a street corner in Istanbul.

Most impressive book?
Started a few, but haven’t finished even one, which feels really bad now.

Best music?
This year was back to Classical Music, mostly because I didn’t have time to look for new stuff.

Done for the first time in 2014?
Co-founding a company. Giving a talk at a tech conference.

Three things which I could’ve lived without?
1) People I like were being harassed and driven out of their communities.
2) Lack of money.
3) 2 weeks of fear of having forgotten something about my health insurance (finally turned out that I hadn’t).
4) Four computer hardware breakdowns. I like you, but I really hate you, computer.

Best thing someone said to me?
“You’re a great boss.”

Still haven’t …
really started to learn coding. Figured out how to manage my workload.